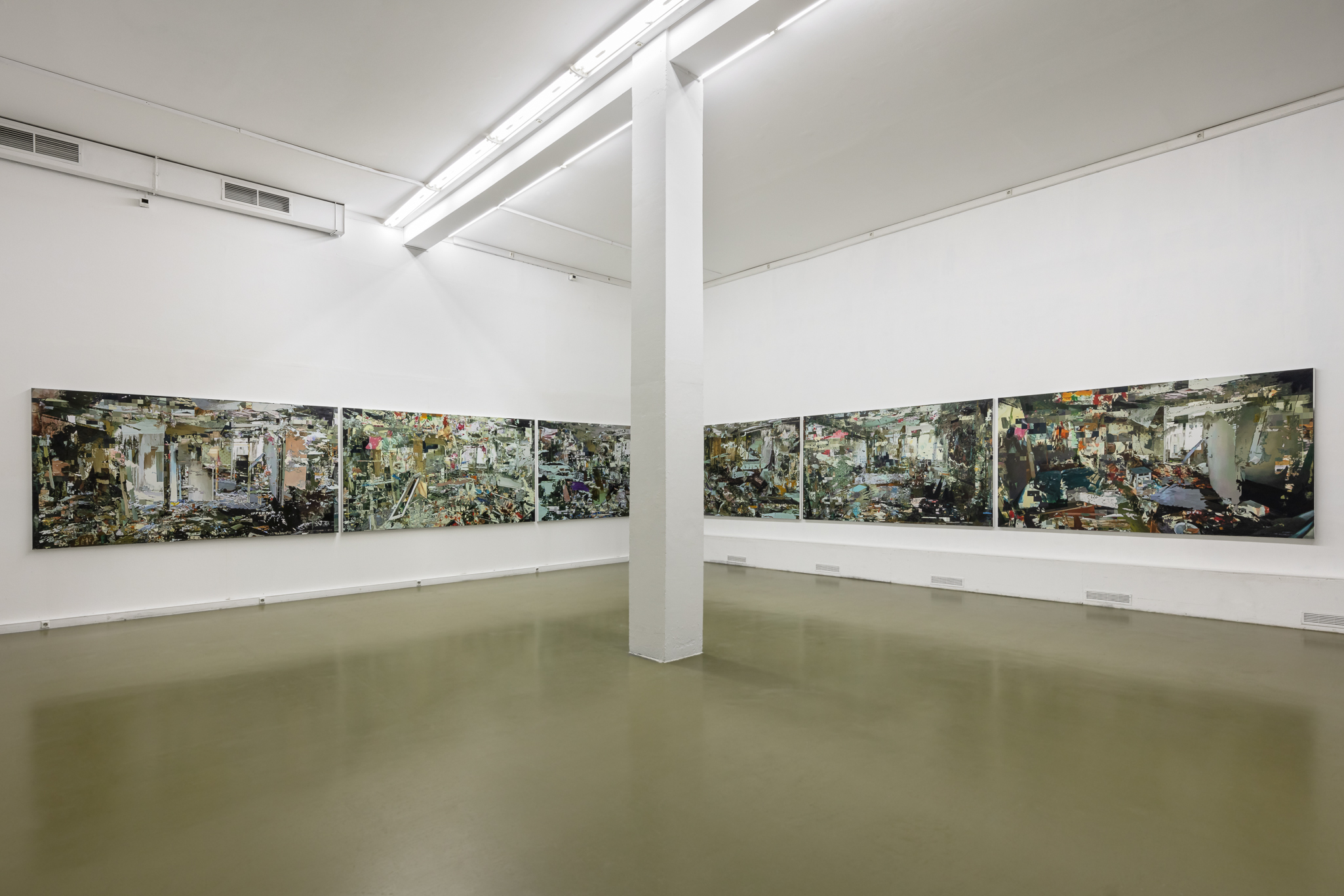 What does the RM mean? RM — is a common abbreviation for the word room. And at the same time this abbreviation is also used for programmers to shorten the command remove.

Sometimes for somebody virtual reality becomes more attractive than reality itself. And it’s not even a detection of our high technologies era. Lovers to escape from real problems and enjoy mind games have been at all times.

The RM idea comes to artists while working on previous project about pixel ruins of the USSR 206 Partial content. While searching the artists often saw the pictures of empty rooms and even deserted cities. And it made them wonder why these spaces had been abandoned. Then the web gave not just historical photos, but photos of modern time, which had already looked like history. In fact once downloaded it has become a history and begins counting time from real moment.

A substance becomes and disintegrates every moment, following a natural cycle. It happens by itself, no need for human participation. The universe comes and collapses and homo sapiens is useless in this magnum opus laboratory. And a man fades into oblivion. Waste and tracks of social life are losing in material circulation. Virtuality hacks of the reality making the holes in it. And a man is moving away from reality, becoming a network noise. Pixels break into presence, increasing the destroying process.

Today’s life reflected on Okruzhnov-Sharova canvases looks like Frankenstein, tailored with true and virtual details. Pictorial details levitate in canvas space, join and mix, combine into some structure and make modern human habitat. It makes you want to run away. These ruins are uncomfortable, but they mesmerize in the narrative. Multiple recurring element of light from the windows reminds the monitor light. Even it begins to move and exfoliate. Virtuality ruins even before it is fully downloaded. It crumbles and loses itself in vital space, where the interest for an object is fleeting and attention jumps from one point to another.

Our works are extension of our everyday life. It’s everything around us, it’s all we see everyday, it concerns and excites us.

Picture is huge, like a movie screen. An array of its flat, totally and densely filled with micro details, resembles a pond with ripples, through flickering reflections which the viewer is looking from above, and at the same time a wall peeling off like a palimpsest and a DVD-record which is broken into pixels. Soon figurative images appear in the shrapnel imagery. Empty room. Window’s outline. All the furniture is Old Soviet : an armchair, an upside-down table. There is a wallpaper’s fragment. Technological noises seem to show the invisible strata of the memory accumulated of all its former inhabitants in the room. These flaky mnemonic shreds are like bodily touches, staying after the disappearance of the bodies. But whoever lives in this room – they don’t exist now.

Working in tandem, Maria Sharova and Dmitry Okruzhnov often reflect on the experience of the social past, primarily the last Soviet. Our main color is like under the water. It is the cold screen’s luminiscent, on the other hand it is such Atlantis, such sunk modernity, the lost civilization of the Soviet Union – the authors say. The experience of their existence flickers in hanging between the several paradigms – the late USSR and the 21st century. Combining technology, figurative and abstraction, artists create their own ruined visuality – a detailed metaphor of entropy.

The artist’s projects of the last years are about time as a corrosive substance, stratifying reality into small elements. The image becomes interesting at the moment of disappearance, loss – these words describe their credo, consonant with the thesis of George Didi-Huberman to see is to lose. Memory itself is a ruin in becoming, a lasting oblivion that painting allows to materialize.

The previous project of Sharova-Okruzhnov 206 Partial content was dedicated to the split of collective memory: in our country, the new generation of millennials can say little about its past. People don’t know history, they’re searching the Internet – but network memory also can fail. The personal experience of distrust the fictitious past, which was given to the contemporary almost exclusively through the screen, is metaphorized in ruined pixels. Manually drawing each of them, artists represent one of the brightest examples of the post-Internet art, reflecting the inalienable materiality of the picture as a medium. The strategy of mechanization of a spontaneous brushstroke, which developed a significant part of painting after abstract expressionism, turns into its opposite – machine pictorialization in post-digital aesthetics. Like such authors as Chuck Close, Lee Songsong, Daniel Richter or Kon Trubkovich, whose painting was influenced by technology, Maria and Dmitry make pixel net one of the main elements of their visual syntax in their earlier projects (Series of Combination, Constructed of the Reality, The Wall). In the 206 Partial content project, a cold technological gamut appears, and the flat glossy plane of the digital background interacts with pieces of figurative elements made impasto by oil paint. We do not use glitch generators, we transform everything ourselves, the authors say. There is a blink between a technical occasion and our control. Such relations of chance and intention model the instability of the memory structure trying to hold on the vital material, and the inertness of this material, which does not hold the shape, like a fluid substance.

The RM series of paintings includes six large-scale works exhibited by continued tape. The name of the project combines the room and rm – the programming abbreviation for remove. Alienated, deserted interiors in the traditions of Edward Hopper, Robert Polidori or Matthias Weischer become the subject of artists’s attention, an intimate portrait of everyday life where a person is given as a negative reception through a significant absence. This time, the authors are interested in the phenomenon not so collective past but the private one, which is elusively becoming history, even if it is private.

The picturesque space of the series is formed according to the principle of fragmentation. Claiming that everyday life is stitched from pieces, artists reproduce the fatal cracks basing the rapidly virtualizing reality. Putting on digital noise in a colorful body, the authors create the basic visual effect of the series – shedding, cracking of visible space. It is unstable, gapes with bald spots, flows through fingers. Walls move, pixels leak through things, torn pieces of paper stick out from furniture debris. The fragments of visuality preceded by its conditional integrity, it is not collected from them.

At the composition level, this dynamics of instability is expressed in the predominance of centrifugal tendencies of the picture over centripetal ones. The expressed visual center gives a way to a non-linear movement of the gaze. The works of Maria and Dmitry suggest a dynamic perspective of vision – wandering contemplation including many trajectories of movement through small elements and color spots layers. Educated as theater artists, this case they primarily create an atmosphere of displacement, drift. There is no “bottom” of the picture, there is a crushing background behind the foreground. Picturesque elements are surrounding the viewer, incorporating and spraying his sight. This is a penetrating, mobile, tactile look, forced to plunge deep into the picture, into the details, grouping its way.

Creating their imagery, artists work with at least a triple distance. The mnemonic figurative image, sprayed in the memory noise, is reproduced by the screen with a digital glitch, which texture, in turn, is recreated anew with pictorial means. The image is destroyed and reborn, emphasizing the unavoidable gap, the barrier between the past and the present in the subject’s experience on each of the stage of mediation. On the other hand, artists analytically dissect this gap, materializing the effort to cross the border. Captured by this memory trap reproduced by the picture, infected with entropy, the viewer is forced to remember through oblivion, to build a view of the historicity of everyday as a paradoxical wholeness of non-unity.